Enormous expanses of glistening gooey mud exposed at low tide characterise the upper Bay of Fundy. Concealed within this seemingly lifeless brown mass of sediment is a busy underworld – the buried universe of mud creatures. An incredible array of invertebrates, including various types of sand worms, molluscs (e.g. snails and clams), shrimp-like animals, and microscopic creatures, make their home in the mud. It’s a community unto itself and that remains largely overlooked by people… but not by shorebirds.

The wealth of life in the mud flats offers a magnificent feeding opportunity to tired, hungry, travel weary shorebirds! The main course on the mud flat menu is Corophium volutator, or the tiny “mud shrimp.”

The upper Bay of Fundy is the most important post-breeding migratory stopover for Semipalmated Sandpipers in the world! Other species of birds that may be seen nearby include Least, White-rumped, and Pectoral Sandpipers, Black-bellied Plovers, Yellowlegs, Canada Geese, Great Blue Heron, Blue-winged and Greenwinged Teal, and Black Ducks, Northern Harriers, Bald Eagles and Red-tailed Hawks. 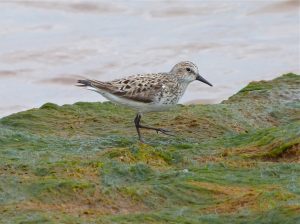