Fundy Discovery Site is one of the most convenient and accessible places to experience the incredible tidal phenomena of Canada’s Bay of Fundy – home to the highest tides on Earth! A tidal bore occurs here on the Salmon River near Truro, Nova Scotia twice daily at predicted times offering a natural demonstration of the extremity of Fundy’s renowned tides.  View LIVE Webcam

What is a Tidal Bore?
A tidal bore is a tumbling wavefront which moves upstream in a river, announcing the arrival of an incoming tide.

Tidal bores occur in regions of the world that have large tides. However, a tidal bore does not occur in every river flooded by a high tide.

Three conditions are necessary to form a tidal bore:

Why does the size of the tidal bore in the Salmon River vary?
The largest tidal bores in the Salmon River occur on the days of perigean-spring tides (the Moon closest to Earth and at its new or full phase). Occasionally, because of much rain and/or rapid snow melt, the river may be too deep for a tidal bore to form. This is most likely to happen if the tide is a minimal apogean-neap tide (the Moon furthest from Earth and at its first- or last-quarter phase).

Why are Fundy tides so high? Resonance — like a push on a swing

Imagine a parent pushing their child on a swing. A gentle, repetitive push by the parent will sustain a large back-and-forth motion of the swing. The parent must time the pushes to closely match the natural period of the swing, a condition called resonance. If the timing is poor, the swing will not move much.

The time for this cycle is close to the 12.4-hour period of the lunar tide, which means that each Atlantic tide gives the previously reflected wave an almost perfectly timed push. It is that small, repetitive, well-timed push that drives Fundy’s tides near resonance, making them so large!

The vertical tidal range is the difference between low and high tide. In the Gulf of Maine/Bay of Fundy system, the vertical range of the tide is progressively larger toward the head of the Bay of Fundy, and largest in the Minas Basin.

The vertical tidal range is about 2 metres in the open Atlantic Ocean. Compare this with an average of 12 metres (40 feet) in the Minas Basin. It can even reach 16.5 metres (54 feet) on a perigean-spring tide! 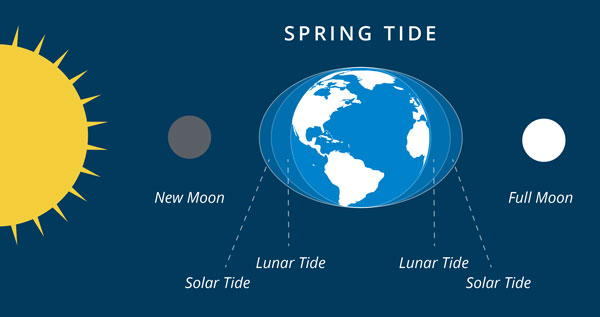 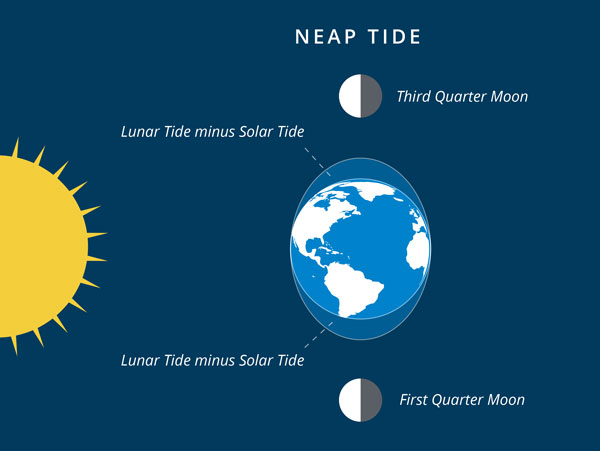 A special thank you to Dr. Roy Bishop who provided technical assistance in the preparation of this content.

What causes the tides?
The Moon and Earth attract gravitationally, making them accelerate toward each other. Thankfully, they do not collide because they are moving sideways as they revolve together in their mutual orbit.

In a similar fashion, the Sun also causes tidal bulges on Earth. But because the Sun is much further away, its impact on the tides is much smaller than that of the Moon.

Did you know?
Tides are delayed by 50 minutes per day because the Moon orbits slowly in the same direction that Earth rotates.

Thus at any place on the oceans, the largest tides, known as perigean-spring tides, occur when the Moon is both close and at its new or full phase.

Fundy tides are unique in that they respond more to the perigee-apogee influence than they do to the spring-neap influence.